January 12, 2011
So both my brothers are on twitter Paul and Bob.  I followed them because I wanted to believe there was something good about the site.  To be honest I have yet to see a tweet that has added to my life.  My latest from my older brother leaves me wondering: 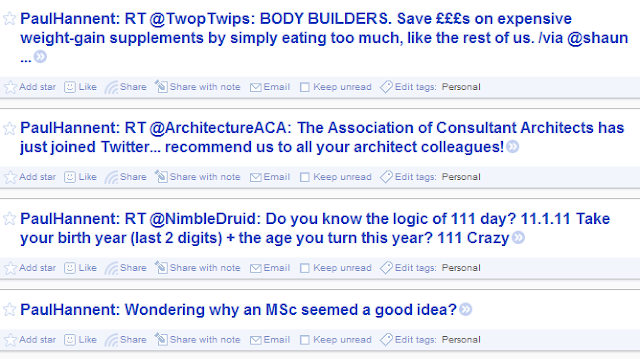 1, I guess is meant to be a joke, however those that actually know about fitness (which oddly my brother does) know that its actually protein that people need, not saturated fats which most people eat to get fat.

2, When Paul talks about his building stuff its clearly him talking to an audience, which is not me, this is the signal to noise ratio.  That post is just noise to me as it means nothing but I still read it.  Everybody wants less noise and more signal in their lives, it make life more worth while.

3, A re-tweet... God these annoy me like chain letters.  Its also very primary school maths.  Also consider my son that was born in 2001 and will be 10 this year.  So his answer is 11 which fails this "Crazy" maths.

4, Wondering about a Masters!  Really!  Given the above brain dump you gave the world I think there are more important things to work on.

One of the things I read about when starting blogging is that you should have a theme and that will attract an audience.  If you stray from that theme such as you writing about computing and then post a couple of posts about running then your audience will leave because they came for the computers and not the running.  If you want to post about a different topic, you should create a new blog and link to it.

Paul apologies to you, I am only highlighting what's wrong with the digital age, not personally picking on you.  Before the Internet an editor would vet anything that was published.  Now anybody can publish anything and they often do.  What twitter lacks and blogs have is tags, as an editor I can tag a post as a particular topic and a reader can follow just those topics.


Footnote: I am no longer following Paul, his tweets are too random.  Bob I still do, however the jury is still out on the whole point of twitter.
blog Oddbits